Christchurch Harbour is a natural harbour formed by the confluence of the Rivers Avon and Stour. The harbour is bordered to the north and east by the town of Christchurch, to the west by Wick Fields and to the south by Hengistbury Head. Stanpit Marsh provides an effective buffer zone between the harbour and the encroaching urbanisation.

Habitat within the harbour is tidal mud around Stanpit Marsh, a mixture of heathland and sheltered woodland on Hengistbury Head, and open fields with maturing vegetation to the east of Wick village. The south-east tip of the headland offers seawatching opportunities as birds enter the western Solent. Because of the wide variety of habitats that are contained within an area of less than 9-square kilometres, during the course of a year a high number of bird species can be encountered. In fact, since formal recording began in 1956 over 320 species have been recorded, with over 220 being possible in many years.

Birding around the harbour can be difficult, but rewarding. While birds are certainly attracted they tend not to stay too long due to a mixture of obvious onward flyways and human disturbance. In spite of this, several rarities are recorded each year and most UK birdwatchers will have visited the harbour on at least one occasion.

Some of the favoured sites for birding in the harbour are: Wick Fields, Wick Ditch, the Wood, the Beach Huts, Stanpit Bight, Parky Meade Rail, the North Scrubs, Fisherman’s Bank and Mudeford Quay. Please view our interactive map for exact locations and further details of what you might see at these spots.

For Hengistbury Head park in the pay and display car park at SZ162911.

Tide times in the harbour are listed as a sequence of low, high, high. Although there is a slight ebb between the two highs, it cannot be guaranteed to expose any mud. The best wader viewing is between one and three hours before the first high water. Daily tide times are published on the Home page.

View the full archive of photographs, which now contains over 250 species.

Here is the full archive of features that have previously appeared on the CHOG website. 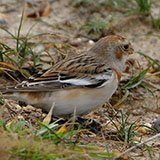 View the full archive of photographs, which now contains over 250 species.

Here is the full archive of features that have previously appeared on the CHOG website.